How would you compare the reproductive patterns of monotremes, marsupials, and placental mammals?

First thing first: How are monotremes, marsupials and placental mammals related? All are included in class Mammalia:-

Several different classification systems are proposed for mammals: I would follow a basic one where they are divided in two subclass:
Prototheria and Theria.

All living prototherians are included in order Monotremata. There are only two such mammalian animals living in Australian continent-
the duck billed Platypus and spiny anteater Echidna.

Internal fertilisation takes place in egg laying mammals. They still have a cloaca and male's penis remains inside this chamber. They lay yolky shelled eggs, and embryo develops within water filled amnion .

Young ones get to lick milk from both parents (hence male monotremes show gynacomastia). Milk is secreted like sweat; there is no nipple.

Living metatherians are included in order Marsupialia. The animals are also known as pouched mammals, distributed in Australian and South American continents.

They have a very short gestation period, because they develop yolk sac placenta . Once the yolk is absorbed, placenta can not provide support to the foetus and hence a very immature joey is born.

True placenta, supported by chorion, develops in Eutherian mammals. They are very successful and are divided in many orders. This is mainly because of the fact that the foetus is nourished in uterus for a long time and babies are born in quite mature condition, barring a few. Elephants have longest gestation period of 95 weeks (human's is close to 40 weeks).

Placenta is an organ formed by foetal and maternal tissues, through which nutrition along with oxygen is supplied from mother's blood to baby's blood.

A comparison between yolk sac placenta and chorionic placenta is given below. 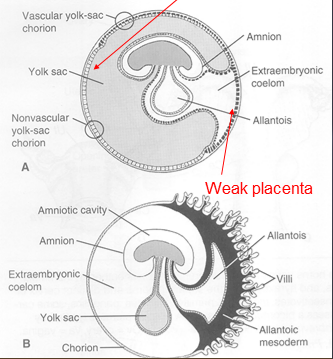 4312 views around the world