If perihelion and aphelion refer to the nearest and farthest point from the sun, respectively, and according to physics, Earth orbits faster when it is nearer the sun than when it is farther. Does this affect the length of day on the earth?

The Earth actually has two different types of days, a sidereal day, and a solar day. A sidereal day is defined as one complete rotation of the Earth about its axis. A solar day is measured by the sun returning to the same spot in the sky. If you were to set up a sundial and start a stopwatch at noon on one day and stop at noon the next, you would measure a solar day. 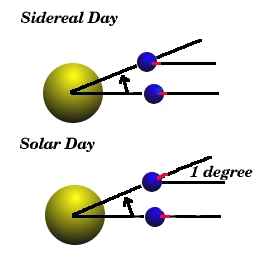 Since the Earth's rotation speed is not effected by its location in its orbit, a sidereal day is consistently 23 hours 56 minutes and 4.1 seconds over the course of a year. A solar day, however, does change depending on where the Earth is in its orbit.

An average solar day is 24 hrs. This is the time that we set our clocks to. At perihelion, the Earth is moving at its fastest around the sun. Because the sun is moving faster relative to the background stars, it will take longer for the Earth to catch up, resulting in a longer day by about 15 minutes. At aphelion, the Earth moves at its slowest pace around the sun, so the day is shorter by about 15 minutes.

2043 views around the world