Is octane a polar molecule and does it have an attraction for water?

No, octane is a non-polar molecule.

Octane () is a hydrocarbon, an organic compound consisting entirely of carbon and hydrogen atoms. SInce a polar molecule must have polar bonds, let's look at the polarity of the bond in order to determine if octane could be considered polar.

In order for a bond to be considered polar, the difference in electronegativity between the two atoms must be greater than 0.5 (this will vary in some textbooks). Since this is not the case for and , their difference being 0.35, the bond is considered to be non-polar, which means octane is a non-polar molecule.

Since we've established that octane is considered to be non-polar, it will not be soluble in water, since water is a polar solvent. This will happen because octane (hydrocarbons in general) contains neither ionic groups, nor polar functional groups that can interact with water molecules. Such compounds are called hydrophobic (literally, water-fearing). 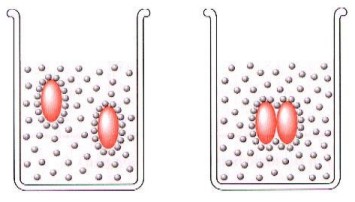 Non-polar molecules will stick together in order to minimize their contacts with the water molecules.