Pangea formed by the somewhat random drifting around of continental plates that collided together into one super continent.

Supercontinents are not formed by volcanic processes piling up rocks, but spreading centres do play a role in breaking supercontinents up. These bits of crust float around because they are less dense than oceanic basaltic crust and so when they collide, they tend to form mountains and stay "afloat" rather than being subducted and recycled in the mantel. Mountain ranges are essentially where continents get "welded" together for millions of years. 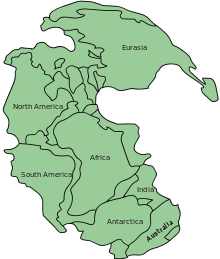 From 175 million years onward, Pangea broke up and the pieces of continental crust starting to drift apart to the position they have today. Interestingly, scientists believe that a new Pangea might form again in 250 million years in the future!

681 views around the world