What are accretion disks?

Discs that material has collected on.

The most common referred to accretion disc is that associated with a black hole. So any material affect by the gravity of the black hole but too far away to actually get drawn into the black hole, ends up in orbit around the black hole. That results, over time, in a massive amount of material collecting in a disk. Imagine an asteroid belt but with so many asteroids that they start colliding into each other all the time and instead of remaining in a belt they actually become an almost solid mass in a disk shape. 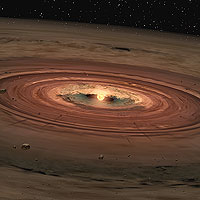 See all questions in Galaxy Composition

1124 views around the world