What are examples of Deus Ex Machina?

Deus ex machina is an unexpected event or power that turns the tide on a seemingly hopeless situation.

Deus ex machina is an unexpected event or power that turns the tide on a seemingly hopeless situation. It shows up in literature, but they also happen in history. So let's talk about one of each. 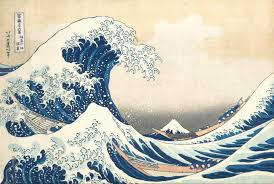 This is a Japanese woodblock of a very famous tsunami. It's a very famous depiction and so I'll assume that you've seen it somewhere at some time. So what makes it so famous?

Back in the time of Kubla Khan, the great king turned his sights on Japan as a place to conquer. His big problem was getting his hoards from China to the islands of Japan and so he had shipyards all along the Chinese coast make hundreds of ships for the journey (most of them were shallow draft vessels and so they weren't designed to do well in heavy seas). it took some time but the ships got made, the hoards boarded, and they set off for Japan.

They made it to the main island where Japanese samurai were waiting. Day one of the invasion didn't go well for Khan and his hoards - the samurai being the greatest warriors ever - but the numbers the hoards could bring ashore began to overwhelm the samurai. But before the victory could be sealed, the day ended, darkness fell, and everyone went back to their camps for the evening. But both sides knew that it would only take one more day for the hoard to win the battle.

Overnight, seemingly out of nowhere, a tsunami hit and sank the fleet, killing the hoard, and essentially saved Japan from invasion.

From the Lord of the Rings, there is the Battle of Helm's Deep. Aragorn is tasked by Gandolph to have Helm's Deep hold for five days and on the fifth day look to the East.

The battle rages over the course of the five days, the walls are breached, the fighting is pushed into the mountains of the Deep. As a last desperate effort to simply stay alive and live for a few more minutes, the remaining defenders ride out in glory to take the fight to the enemy. They have no idea it's the fifth day, simply that they are going to die in glory, and so ride out to do so. They make it out of the fort in time to see the dawn break and see a massive amount of reinforcements ride down to save the day.

789 views around the world