What forces can disturb relative dating?

Earth Science Evidence about Earth's Past Relative Ages of Rocks

Relative dating is the process of determining the age of an artifact, a layer of rock, a fossil, or something else by using the position of that item in relation to other surrounding rock layers and items. (Remember, we are only able to determine whether something is older or younger compared to something else.) See this link for a thorough review of how relative dating is done. 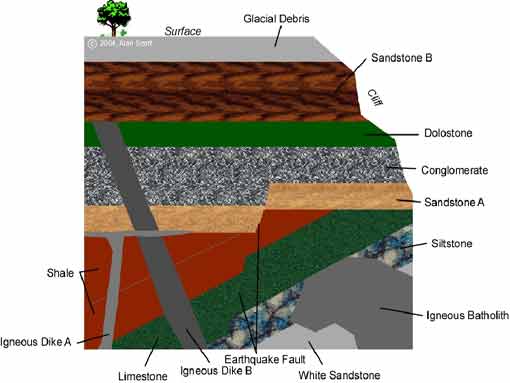 In the example above, Sandstone B is younger than Sandstone A.

Because relative dating doesn't give you an absolute age, errors are much less common in comparison to absolute dating. However, forces that can disturb relative dating or at least make it more challenging include multiple geological processes occurring over a short period of time. If the layers you're examining are very small, it can be hard to determine for sure which occurred first.

In terms of paleontology, if an earthquake occurs and moves a fossil to another layer of the earth, one would think that fossil is older or younger than it is.

Humans can also affect this process. By burying our dead, we impose them into geologic layers that we, ourselves, did not actually live in.

Erosion could also take a mineral or fossil out of position and place it in another layer, thus causing humans to incorrectly assume an older or different age.

See all questions in Relative Ages of Rocks

7662 views around the world