What is an experiment in that all factors are identical except the one being tested?

It is a controlled experiment. 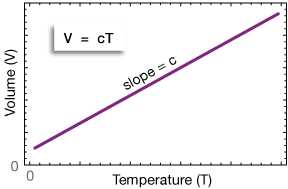 The graph above represents Charles' law. Charles' law states that the volume of a gas is directly proportional to the Kelvin temperature, with pressure and amount of gas to be held constant. Temperature is the experimental/independent variable because it can be varied, and volume is the dependent variable. The experimenter varies the temperature and measures the resulting volume. The slope of the line is the constant , where , and .

6057 views around the world