What is nitrogen fixation and why is this important?

Nitrogen fixation is the process in which nitrogen is taken up by organisms, especially certain microorganisms as part of the nitrogen cycle.

Niogen is a key component in decomposition and is released when an animal or organism dies. Decomposers are able to absorb said nitrogen and turn it into ammonium, which can then form nitrites through nitrification. The nitrites then for nitrates when they pass through certain bacteria. The nitrates can either be taken into plants through assimilation, or released as nitrogen gas into the atmosphere through bacteria. The nitrogen gas is then teen in by plants, which can die, or be eaten by animals which die in turn, completing the process.

As you can see in the diagram, the nitrogen cycle is an ongoing part of our environment. Without nitrogen fixation, our community would not be able to filter the needed nutrients and function as a unit. 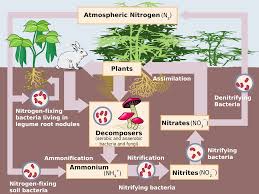 See all questions in The Carbon Cycle and the Nitrogen Cycle

1948 views around the world