What is the composition of the Earth's core?

At the centre of the Earth is the core, which has two parts-
1. The Solid Inner core.
2.The Liquid Outer Core. 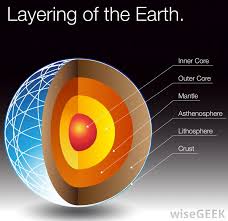 The inner core spins at a different speed than the rest of the planet. This is thought to cause Earth's magnetic field.

When charged particles from the solar wind collide with air molecules above Earth's magnetic poles, it causes the air molecules to glow, causing the auroras — the northern and southern lights.

4423 views around the world