A Lewis resonance structure is one structural "snapshot" out of many that contribute to a molecule or polyatomic ion's overall, real-life resonance hybrid structure.

Let us take as an example. Noting that the total number of valence electrons is (the last one due to its charge), and knowing that nitrogen commonly makes three bonds but a maximum of four bonds (more than oxygen can make), we can draw the following Lewis resonance structures: 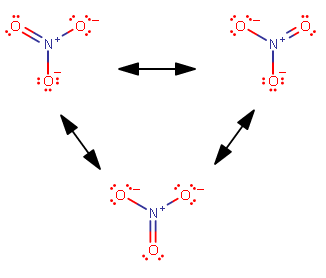 The resonance hybrid structure is actually

because in reality, the electrons in this polyatomic ion are delocalized, meaning that they travel freely throughout the system.

The individual resonance structures simply illustrate still states for the electron distributions that contribute to the overall resonance hybrid.

See all questions in Major and Minor Resonance Structures

9271 views around the world