What is the skeletal structure for #C_6H_11NO#?

It is not particularly obvious, but it probably looks like this: 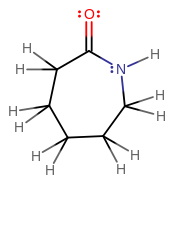 You can tell that a lactam is essentially a cyclic amide.

Another possibility could have been hexanenitrile oxide (CAS: 88911-37-9), but that is not very likely. I did find that on https://scifinder.cas.org/, however, it seems theoretically generated, and it of course looks impossible due to nitrogen breaking the octet rule. (Which brings me to wonder why it was even in the database.)

Perhaps the compound could work if it was a connection, but it's not proven to exist as far as I can tell.

See all questions in Skeletal Structure

3707 views around the world