What is the strip of dry grassland on the southern border of the Sahara Desert?

That strip of dry grassland is called the Sahel.

As you said the Sahel is bordered by the Sahara Desert to the north. To the south of the Sahel is an area called the Sudanian Savanna, a tropical grassland. The Sahel extends across the entire latitudinal (east to west) length of the African continent from the Atlantic Ocean in the West and the Red Sea in the East (in fact the Arabic word "sahil" means "shore" or "coast"). 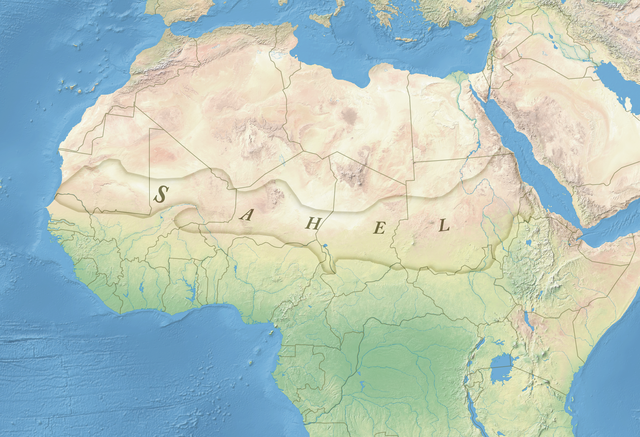 The Sahel is considered an arid grassland. It receives some water, provided by a short (1 to 2 months long) rainy season, however like its neighbor to the north (the Sahara) the Sahel is very hot, dry, and windy (though the Sahel is generally less intense than the Sahara).

Unlike the Sahara which is mostly comprised of sand and compact dirt, the entire Sahel region is uniformly covered with grasses, shrubs, and trees. These grasses and trees thrive during the rainy season however during the dry season most of the grasses die while the trees and shrubs lose their leaves.

During the rainy season the Sahel provides a crucial resting point for birds that migrate between Eurasia and Sahelian Africa.

6863 views around the world