What key difference do experiments have that correlation studies do not have?

Experiments actively change independent variables. Correlation studies do not. For this reason, experiments are more likely to prove causation.

In Box, Hunter, and Hunter's book "Statistics for Experimenters" the authors show an intriguing plot of the human population in Oldenburg on the y-axis versus the stork population on the x-axis during the years from 1930-1936. 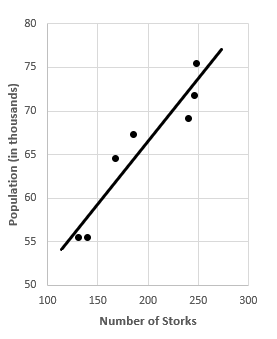 This demonstrates that while this correlation study shows correlation, it does not help us understand causation because no independent variables were actively changed by the people conducting the study. They simply recorded data. They did not run any experiments.

See all questions in Correlation and Coefficient of Determination

4828 views around the world