What would happen if a positively charged sodium ion and a negative chlorine ion came into contact?

Nothing, really. This is just what happens (over and over) in the formation of a crystal of NaCl.

The reaction that leads to formation of the sodium and chloride ions (starting with atoms of both elements) has produced two very stable particles, and .

This reaction is highly exothermic, meaning that the energy of the ionic solid is much lower than that of the separate elements. This large reduction in energy can be thought of as a sort of barrier which prevents the reverse reaction that would see the elements reproduced.

The sodium chloride crystal is a repeating lattice of sodium ions and chloride ions in close contact, and is a very stable chemical - not prone to change. 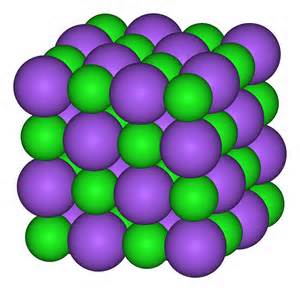 This illustration shows the lattice of , with sodium ions in green and chloride ions in purple.

They both normally exist either as ions in solution or as solid salt already.

In solution, they evenly disperse. As the solution is evaporated, the ions will eventually come together and form an ionic-bond solid - salt.

2013 views around the world