When DNA is replicated, or copied, the ladder splits as the bases separate. New units are added to each half of the DNA molecule. How does this create two identical molecules of DNA?

I will go ahead and explain the entire process of DNA replication.

DNA replication is semi-conservative. This means that each new molecule of DNA contains one strand of the parent molecule and one complementary strand that is newly synthesized (daughter strand). Hence two newly generated molecules remain similar to the parent DNA molecule. 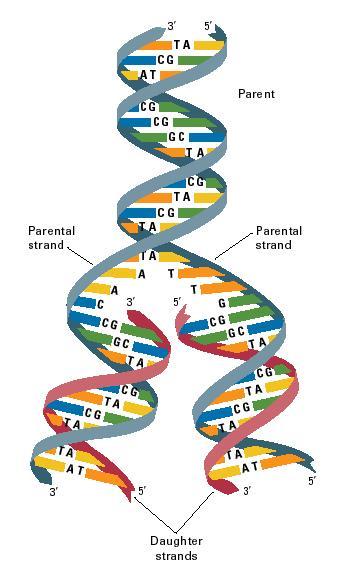 DNA replication occurs in three basic phases which relies on the structural features of DNA and a number of specialized enzymatic proteins.

The first phase is initiation.

It begins at a specific nucleotide sequence, called the origin of replication. Here, several initiator proteins bind to the DNA and begin the process of unwinding the double helix. Helicase is a group of enzyme that helps unwounds DNA by breaking hydrogen bonds between the nitrogenous bases. Another protein then helps stabilize the newly single-stranded DNA.

The second phase is elongation.

Here, two new strands of DNA are assembled using the parent DNA as a template. The enzyme responsible for this is DNA polymerase III. However, it only attaches new neucleotides to the free 3' hydroxyl end. For one strand called the leading strand, this only needs to happen once as it moves in the same direction as the replication fork- the direction where the helicase enzyme is unwounding the DNA.

The tricky part is the lagging strand.

It requires DNA polymerase to move in the opposite direction - causing the formation of short and discontinous segments - called the Okazaki fragments.

The last process is termination where a special DNA sequence in the template strand causes RNA polymerase to detach and transcription to terminate.

2054 views around the world