When does hydroboration–oxidation in alkyne occur?

When... it is voluntarily performed? It's quite doable. Just do the same reaction you would do for an alkene, except on an alkyne.

Depending on the alkyne's triple bond location, you get either an aldehyde or a ketone after keto-enol tautomerization.

An acceptable reactant/reagent combination for this is:

1. complexed with (Tetrahydrofuran), generally written as .

Notice that the aqueous label is necessary because water does participate in this reaction at the end. (If you don't want to put it, then you need to additionally specify as a reactant.)

I've drawn below the overall mechanism for hydroboration of a terminal alkyne. 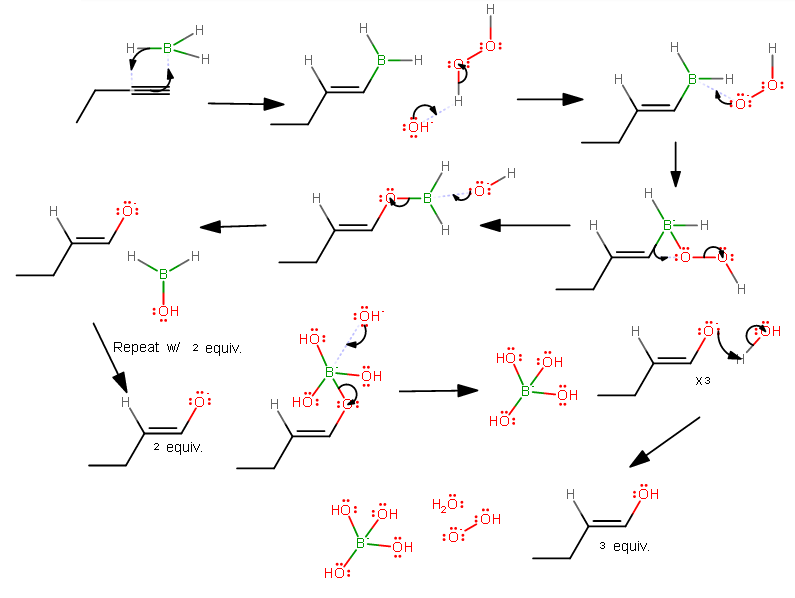 1. adds on via syn addition, through donation of the electron from the alkyne into boron's antibonding orbital.

2. The hydroxide in an alkaline hydroxide such as equilibrates with hydrogen peroxide once you add it into solution. The pKa of water is , while the pKa of is , so the equilibrium lies on the side of being protonated.

3. The destabilized peroxide anion binds onto boron, since boron is an electron acceptor.

4. The destabilized boron shifts its bond away from the alkene and switches it onto the farthest oxygen on peroxide, conjugating the bonding electrons and ejecting the on the far end off. This is often a difficult step to remember.

5. The ejected attacks boron, and breaks off, donating its electrons to the newly-generated alkoxide.

7. This stops as soon as boron acquires four , at which point it can no longer accumulate any more substituents.

8. The reaction concludes when water protonates all three alkoxide intermediates (water was used at the beginning to solvate the alkaline hydroxide). You now have three equivalents of the enol you just generated, a , water, and the peroxide anion.

This is NOT the end of this reaction, however.

You have an enol, which will undergo keto-enol tautomerization. Since you did this reaction in basic conditions (the alkaline hydroxide), the following mechanism occurs: 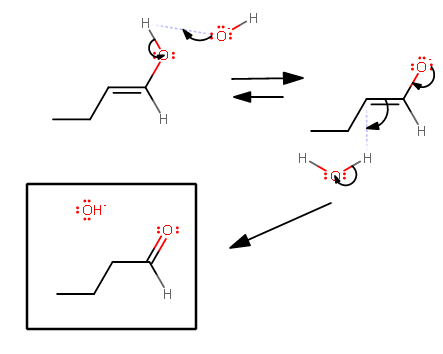 1. Hydroxide steals a proton from the enol's hydroxyl group. An enol's pKa is higher than the pKa of a regular alcohol (and thus higher than that of water)---enolates can be quite good nucleophiles in some contexts.

2. This is one of those contexts, where it grabs a proton from the just-generated water to finish the tautomerization.

You get an aldehyde because you oxidized a terminal alkyne.

If you had oxidized a non-terminal alkyne, you would get a ketone whose carbonyl is on the less substituted carbon.

See all questions in Hydration via Hydroboration-Oxidation

5760 views around the world