When FDR said there was nothing to fear but fear itself, what did he mean?

It was meant in a way that would keep the nation calm so that they could recover.

At the time, America was going through the Great Depression and people had lost all of their life's savings in seconds. This made citizens scared about their future and the country - they felt unsupported by the government and let down by the banks (which had crashed). 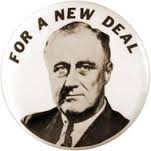 When FDR said his famous line, he was trying to restore order and trust. He launched his New Deal campaign and part of this was to get citizens trusting banks again so that they could become functional. By panicking, America would get nothing done. FDR wanted everyone to get up, get back to work and get back on track. The first step to this was calming everyone down.

The biggest hurdle they would have to jump on the way to recovery was people's fear - which is why FDR said that fear was the only thing you should fear, or worry about. Basically, "everything is ok, we can get back on track, but if you are all scared and panic - it will be a lot harder!"

4596 views around the world