When you stand on the observation deck of the Empire State Building in New York, is your linear speed due to the Earth's rotation greater than, less than, or the same as when you were on the ground floor?

Linear speed due to the Earth's rotation is greater than observer's linear speed when he is at the ground floor.

Look at the following picture showing rotation of earth and speed at various latitudes. 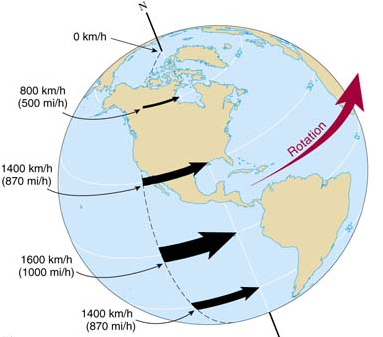 All point on the earth rotate in front of the sun over a period of 24 hours. The points on the equator have the highest rotational speed and the ones at poles have the lowest, zero speed.

If is the angular velocity of the earth's rotation,
the time period of earth's rotation and
is the radius of the cross-section circle on whose circumference any point is located, the rotational velocity , or speed at which the point is rotates can be found from the expression
.......(1)

The linear speed of observer when located at ground floor level is
.......(2)

Let be the height of the observation deck of the Empire State Building. Now the observer rotates while he is located at the circumference of a circle which has its radius.

The linear velocity of observer due to rotation of earth now is
.......(3)

Comparing equations (2) and (3) we know that linear speed due to the Earth's rotation is greater than observer's linear speed when he is at the ground floor.

See all questions in Newton's Law of Gravitation

2771 views around the world