Which group of fish do scientists believe amphibians evolved from?

We must first note that bony fishes, of superclass Osteichthyes (some may call it a class), are divided in two distinct groups: one of ray finned fishes and the other of lobe finned fishes.

Fishes possess paired fins attached to pectoral and pelvic girdles. In lobe finned fish, bases of paired fins are conspicuously large due to presence of well developed bony structures giving them a limb like appearance.

There are only few lobe-finned fishes alive in the world (though their fossils are found abundantly), represented by three different lung fishes living in fresh water and one coelacanth, a marine organism.

The lung fishes are included in subclass Dipnoi; they were distributed in palaeozoic Gondwanaland. Lung fishes are considered to be evolutionarily more related to ancestral amphibians.

Coelacanth were known only from fossil records before 1938, when the first specimen was found and identified as a 'living fossil' in South Africa. The organism was named Latimeria chalumnae, honoring the lady museum curator who took interest in studying it and specifying the location off Chalumna river from where it was caught. 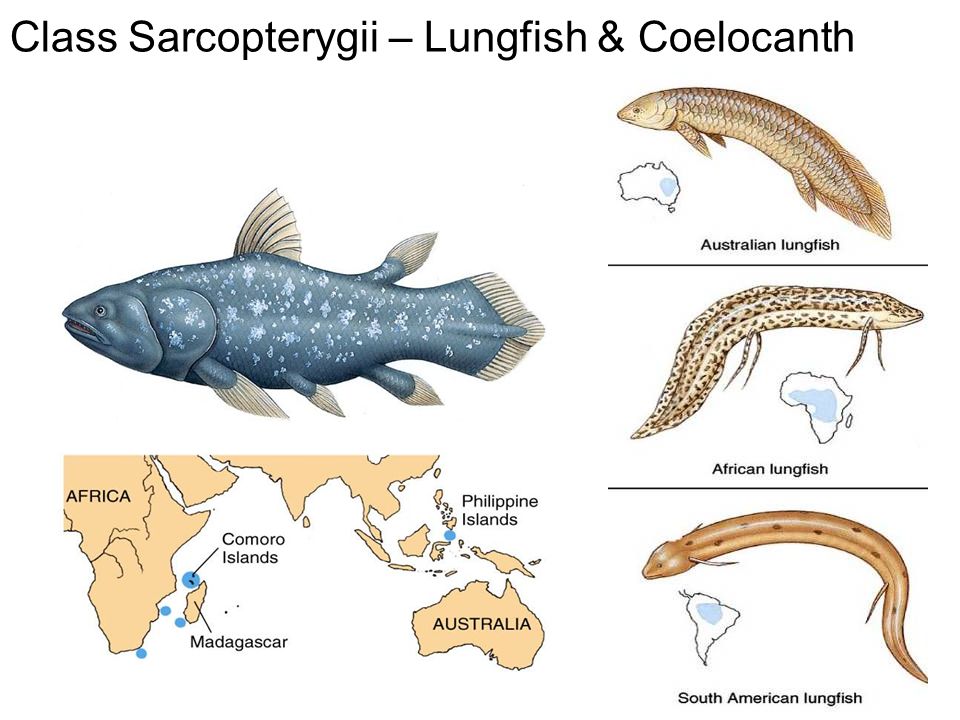 First tetrapodan fossil Ichthyostega is considered to be a 'missing link' between fish and amphibia. Fossil subclass of amphibia, Labyrinthodontia, includes many such representatives who had short legs and large head. They definitely had lungs and used to roam on land occasionally. Also go through this:

5109 views around the world