Who fought in the Korean War, and what were the three stages of the war?

I thought to summarize as follows (even if it is a very complex and controversial war):

Well, the main contendent were:
The South Korean and US army leading the UN forces (comprising many countries: United Kingdom, Australia and France among others);
The North Korean People's army;
The Chinese People's army.

I) North Korean invasion of the south (25 June-September 1950); occupation of the capital Seoul and maximum penetration into the south (Pusan and Pusan perimeter);

Build up of UN forces (mainly US, armored and air force) and consequent strengthening of the opposition to the invasion with counter-attacks and heavy bombing of supply network of the North Korean force leading to a virtual halting of the momentum of the invasion.

II) US Counter-attack (September-October 1950); amphibious landing at Inchon, near the capital Seoul and sortie of mechanized troops from the besieged Pusan perimeter. At this point the North Korean army poorly led for defensive action and lacking naval and air support disintegrates.

US forces rapidly defeat the North Korean units recapturing the capital and even penetrating into North Korea (crossing the 38th parallel). In October the North Korean capital, Pyongyang, falls and US troops charge towards the Chinese border in pursuit of North Korean leaders.

III) Chinese intervention (19 October 1950); crossing of the Yalu river by huge numbers of "volunteers" from the Chinese People's army in "patriotic" support of the North Korean Army. Bitter fighting against US formations using the "en-masse/cannon fodder" technique by the Chinese troops causing widespread heavy casualties and consequent retreat of US formations.

After various battles and even the consideration of deploying nuclear weapons the war came back to where it started, i.e., around the 38th parallel. For many months several battles are fought mainly between Chinese and US forces with little or no gain of territory (kind of re-edition of WWI trench warfare).
This situation led to a stalemate and consequent armistice (July 1953). 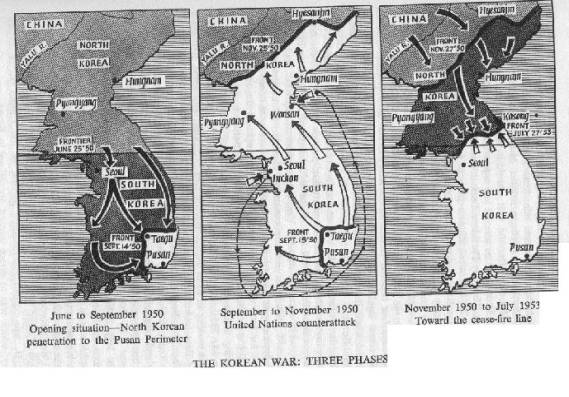 9639 views around the world