Why are small quantities of chlorofluorocarbons so harmful to the ozone layer?

When spray cans were first introduced, the propellent used to shoot the material from the can tended to be dangerous and harmful, such as ammonia.

CFCs, or Chlorofluorocarbons, were invented to rid the cans of the dangerous propellents. They are non-toxic and non-flammable and seemed to be the perfect solution.

It turns out, however, that with all the CFCs being introduced into the atmosphere from all the hair spray, cooking spray, lubricating spray, and all the other kinds of spray can products, it had a harmful effect on the ozone layer of the atmosphere.

There isn't a lot of ozone in the atmosphere, so what is there is important to help protect the surface of the Earth from excess ultraviolet light from the Sun. And it turns out that it reacts to chlorine, which means in effect that Chlorine destroys ozone. 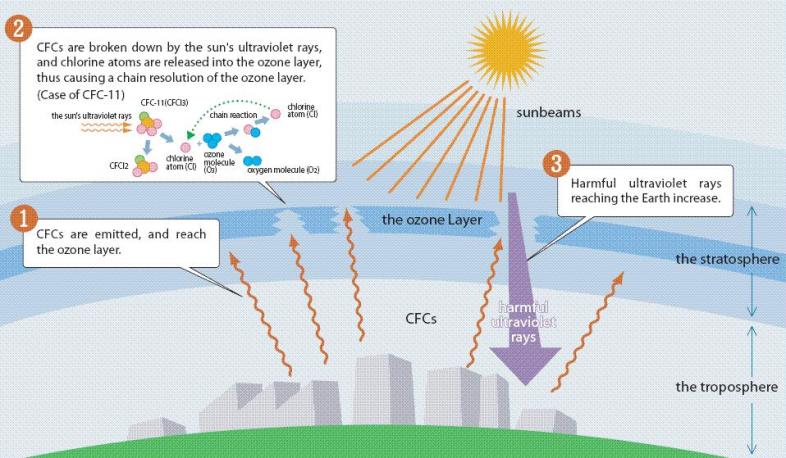 The chlorine in CFCs gets released when it reacts with ultraviolet light, which then reacts with ozone and thereby reduces the protection protection we get from ultraviolet light, which allows more CFC to release its chlorine and on the cycle goes. One free chlorine atom, free because UV radiation has hit the CFC molecule, will interact with multiple ozone molecules. Thus, the damage it can do is perhaps far more than you would expect. 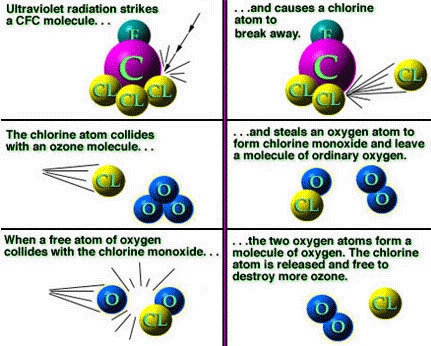 3651 views around the world