Why aren't the two gametes in each pair of cells produced by meiosis genetically identical?

I know that meiosis produces four gametes which are all genetically different, due to having a mixture of chromosomes from both parents, but I don't fully understand the mechanism.

By my understanding, all 46 chromosomes in the adult cell duplicate their DNA producing 46 pairs of chromosomes, the corresponding pairs of which from the mother and father line up in the centre, but with a random chance of the mother's or the father's being on one particular side:

Then the pairs are pulled apart to produce two new cells with 46 chromosomes (23 pairs) each, but here comes the source of my confusion. Since each pair in these new cells was originally produced by duplicating the original chromosome in the adult's body cell, shouldn't the two gametes produced from each new cell be identical? 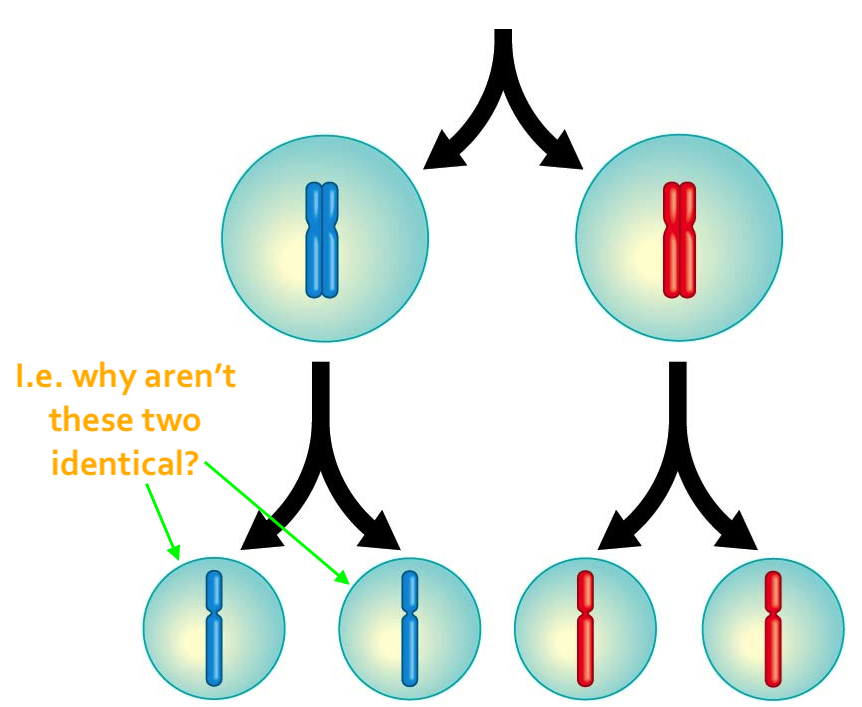 Sorry if this is a slightly silly question but I can't quite seem to produce an answer! Thank you in advance!

Two gametes in each pair of cells produced by meiosis are not identical because recombination of alleles (genes) present on two homologous chromosomes occurs during meiosis.

The gametogenesis involves meiosis.
For understanding the answer to this question, one must understand the process of meiosis.

Meiosis is a reduction division so that the gametes formed are haploid, i.e containing one set of chromosomes.
The body cells are diploid , having two sets of chromosomes, one each contributed by male and female parents. The chromosomes in two sets are identical as far as the length, the position of centromere and the traits represented by genes are concerned.

7629 views around the world