Why does toluene have a lower pka than benzene?

The methyl group is electron-donating to the ring and is therefore easier to deprotonate than the ring. However, since it is a methyl group (pKa of methane is about 50), it is still not that easy to deprotonate, thus having little effect on increasing the acidity.

It's a minor difference, but let's check out the resonance structures for the conjugate bases: 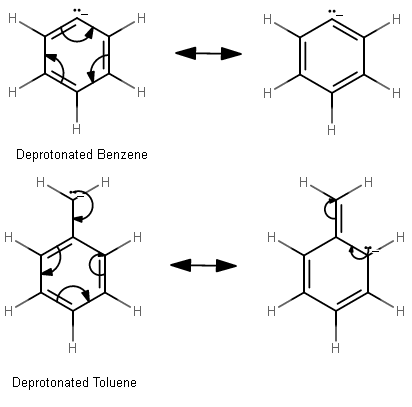 The lone pair of electrons on benzene are perpendicular to the ring, so they are localized outside of the ring (it is just like pyridine's nitrogen's lone pair), so naturally it still has a good resonance structure.

(But we would expect that because benzene is a model aromatic compound.)

With toluene on the other hand, the methyl group is electron-donating onto the benzene ring, so toluene extends the orbital system all throughout the system, but sometimes the electrons are outside of the ring. Since the conjugation extends outside of the ring, not all of its resonance structures contribute to a stabilization of the ring itself. 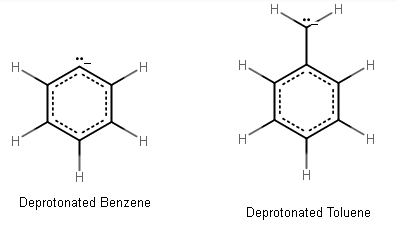 Because it donates electrons to the ring, it can donate electrons to other compounds, more easily than the aromatic ring itself could, corresponding with its greater acidity.