Why don't ionic compounds have electrical conductivity as a solid but they do as a liquid?

Solid ionic compounds do not have electrical conductivity because the ions are not free to move. In a liquid, the ionic compound dissociates into its respective ions.

Electrical conductivity requires the movement of charged particles. The common unit for charge is the Coulomb ().

In the solid state, electrostatic forces hold the ions together in a crystal lattice structure, which is, in short, a 3D interconnected ion network.

A solid ionic compound does not conduct electricity because the ions are not free to move. 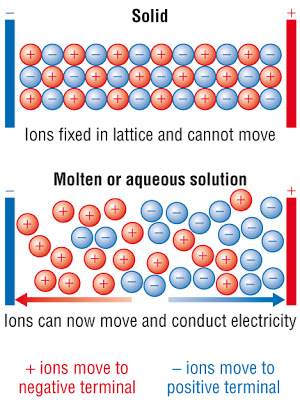 This flow of ions depicted immediately above is an electric current. You can tell because if we use for the unit of charge, , or ampere, is the unit of electric current, which is the same as , coulombs per second, the electrical analog of velocity (velocity is mass-motion, just as ampere is charge-motion).

Therefore, charge-motion is required for there to be electric current.