Why is the plate tectonics theory important?

plate tectonics provides an explanation of how earthquakes, mountains, and oceans are formed .

Plate tectonics explains why and where earthquakes occur. This makes it possible to make predictions about earthquakes.

Plate tectonics explains why and where mountains are formed.

The oceans according to plate tectonics are formed by divergent boundaries.

Plate tectonics helps us understand the forces that have shaped Australia and the Pacific.

Plate tectonics is the theory that explains how huge blocks of Earth’s crust called “plates” move. Hundreds of mil- lions of years ago, the region was part of a giant continent. This ancient continent also included the land that now makes up South America, Africa, and India. Over time, Earth’s plates separated. The giant continent slowly broke apart.

The movement of tectonic plates also helps explain the region’s unique plant and animal populations. After the region broke away from other areas millions of years ago, its plants and animals were cut off from the rest of the world. 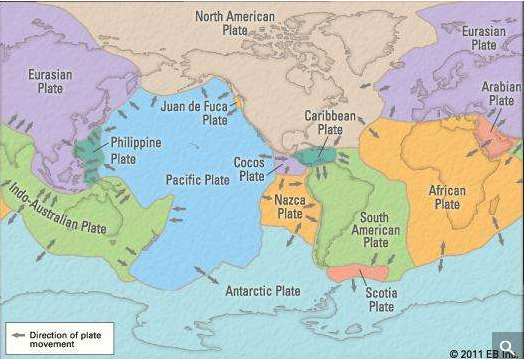