Let's look at the process purely on the basis of electrostatics. It should take more energy to remove an electron from a positively charged atom, than from a neutral atom, because the valence electrons of a positive species should be more strongly attracted to the nuclear core, and shielding of the nuclear charge by electrons should diminish.

On this basis alone, .

In the special case of the alkali metals, the second ionization energy would involve the removal of a non-valence, inner shell electron. And thus, in this instance, should be PROHIBITIVELY HIGH..... 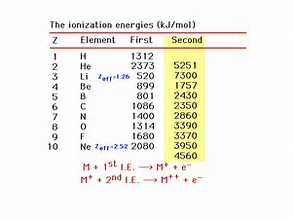 Are the given data consistent with what we have argued? Why is a second ionization energy not listed for hydrogen?