Write 2 experiments that proves that oxygen is used up in respiration.Explain in detail how does this done and what are the things used? 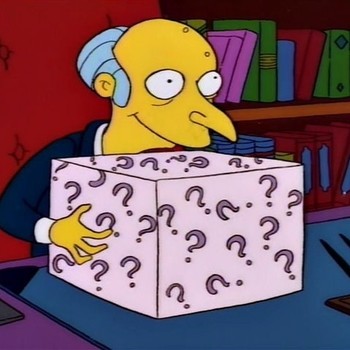 Respirometer apparatus can be set up as shown: This involves two containers, connected by a capillary tube containing a coloured fluid (a manometer).

A live organism (eg a woodlouse) is placed in one container, along with a absorbent (eg potassium hydroxide solution) to remove any produced by the respiring organism.

A glass bead of equal mass and volume is placed in the other container to ensure both containers are identical in every way other than the presence of the organism, so that the only variable is the amount of consumed.

As the organism present respires, it will consume , causing the pressure of the gas in the container on the left-hand side to decrease, drawing the coloured fluid in the manometer up into the left side. The distance moved by the coloured fluid can then be used to calculate the volume of that was lost from the left container, if the width of the manometer tube is known. This is done using the equation for the volume of a cylinder . The average rate of consumption can then be measured by dividing the volume of consumed by the time.

Similarly, spirometer apparatus can be set up as shown: 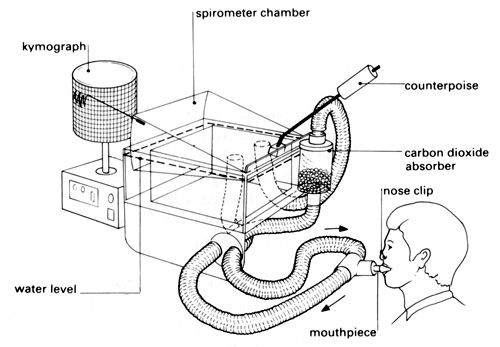 A spirometer works in much the same way as a respirometer. A patient inhales in and out of the mouthpiece. Any they breathe out is absorbed by a absorbant, so the only change in the inside of the spirometer is a gradual decrease in present as more and more of it is absorbed by the patient.

An image trace as shown is produced: 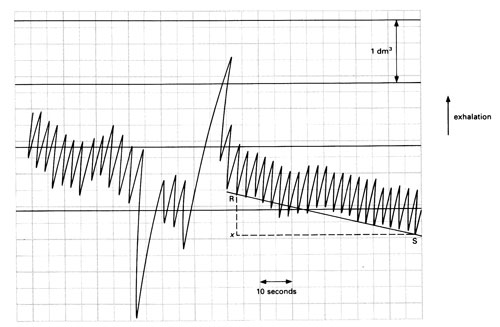 The rate at which the graph decreases (ie the gradient of the trend line) can be found - this gives a rate for average consumption, in .