Because they differ in the type and strength of intermolecular forces their molecules exhibit.

The state in which a compound can be found at room temperature and standard pressure depends on what type of intermolecular forces of attraction its molecules exhibit.

Borane, , and methane, , are gases at room temperature because they are nonpolar molecules, which means that they only exhibit weak London dispersion forces.

A more interesting comparison is between water, , and hydrogen fluoride, , on one side, and ammonia, on the other.

So let's asssume that you're working at a temperature of .

All three molecules exhibit strong hydrogen bonding, a special type of dipole-dipole interactions that arise when hydrogen is directly bonded to one of the three most electronegative atoms - nitrogen, oxygen, and fluorine.

So why is ammonia a gas and room temperature, while water and hydrogen fluoride are liquids?

Another important reason is that these molecules have a different number of lone pairs present on the more electronegative atom.

In water's case, you have two partial positive hydrogen atoms and two lone pairs of electrons on the oxygen atom, which means that each water molecule can form hydrogen bonds with four other water molecules. 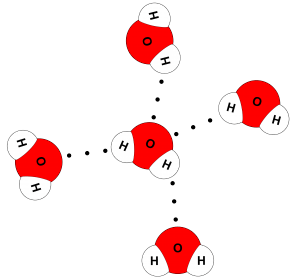 Ammonia has three hydrogen atoms, but only one lone pair of electrons. This time, you will have insufficient lone pairs to allow for the majority of ammonia molecules to hydrogen bond at a particular moment. 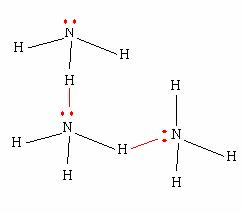 4275 views around the world