The periodic table of elements is an amazing classification tool. There are many things that we chemists do which only require a quick glance at the table to obtain the answer we require.

The periodic table is the arrangement of the elements in increasing atomic number.
The modern periodic law: Properties of elements are periodic functions of their atomic numbers.
Simply put the properties of elements are dependent upon their atomic numbers and these properties repeat themselves after a certain period.
Its made up of horizontal rows called PERIODS and vertical columns called GROUPS.
Each PERIOD starts with an alkali metal and ends with a noble gas.
Its read left to right.The period number=number of orbit/s in the atom of the elements of the period.
Each group has a number and this number = number of valence electron/s in the members of the group.All the group members have same number of valence electrons,therefore their properties are same ( only proportionally stronger or weaker)
Its read up to down(preferably) / down to up
There are many trends that coincide with the order of the periodic table.
1. Atomic Size/Radius: Its the distance between center of nucleus and the outermost orbit.
Across Period: The atomic no increases
(the trend is different for ions.) !
2.Ionization Energy (the energy required to remove and electron from the outermost orbit of an element.) 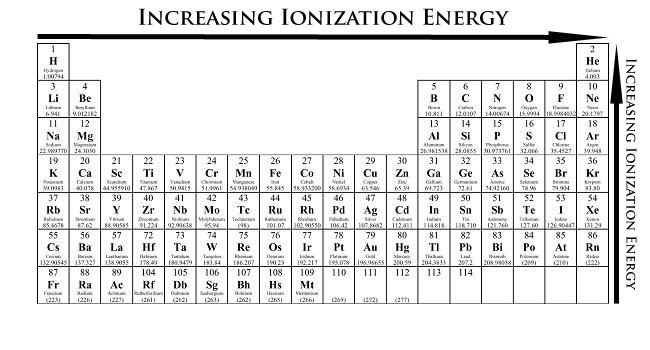 The Periodic Table is a way of listing the elements.

Each element has its own name and abbreviation in the periodic table. Some of the abbreviations are easy to remember, like H for hydrogen. Some are a bit harder like Fe for iron or Au for gold.

791 views around the world