It's worth noting that all of these decay types will result in nuclear transmutation, i.e. the atoms of the elements that are undergoing radioactive decay will be converted to atoms of different elements.

Plutonium-242 will undergo alpha decay, which means that its nucleus will emit an alpha particle.

and a mass number equal to

Beryllium-7 will decay via electron capture, during which an inner-orbital electron is being captured by the nucleus.

This process leads to the conversion of a proton to a neutron and the emission of an electron neutrino. As a result, the nucleus' atomic number will decrease by , but its mass number will remain unchanged.

So, the resulting isotope will have 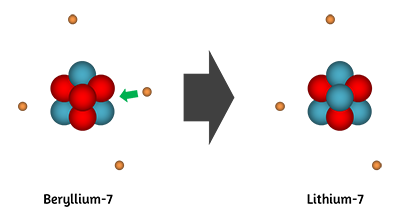 Finally, oxygen-15 decays via positron emission, also known as decay, during which a proton located in the nucleus is converted into a neutron.

The nucleus will emit a positron, the antiparticle of the electron, and an electron neutrino. Positron emission will decrease the atomic number of the nucleus by and leave the mass number unchanged.

The resulting isotope will have

Another quick look in the periodic table will reveal that you're dealing with nitrogen-15.

3071 views around the world