What is an example of a nuclear equations practice problem?

I'll show you an example on how nuclear equations pop up in exams or tests. More often than not you will be asked to complete a certain nuclear equation and name the reaction, like

So, we know that matter must be conserved in any type of nuclear equation - this includes both protons and neutrons, of course. Let's take the first stage of this equation

Here, an U-235 isotope is bombarded with a neutron - notice that the neutron has no charge - the bottom number is 0 - and a mass of 1 - the top number. SInce the atomic number will be unchanged, we know for sure that we are dealing with another uranium isotope, but this time its atomic mass will be . So,

Now for the second stage

We get that the particle's atomic number is 0 and that its atomic mass is 3, which implies that we are dealing with not one, but three neutrons emitted in the second stage. So, the balanced nuclear equation is

This particular nuclear equation describes the formation of a possible pair of fission fragments for the fission of uranium-235. 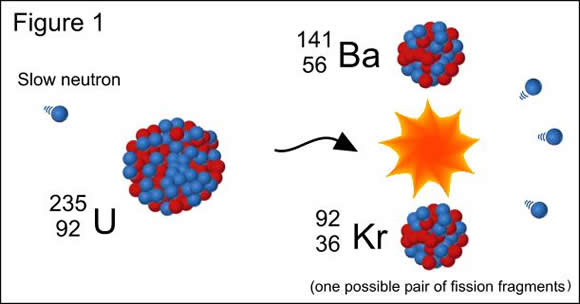 4279 views around the world