Here's why that is the case.

Oxidation numbers are assigned by assuming that in a covalent bond, the atom with the highest electronegativity values "takes" the bonding electrons from the less electronegative atom.

As you know, oxygen is much more electronegative than hydrogen, so any time these two elements will form a single covalent bond, which will polar in nature, oxygen will "take" both bonding electrons used to make the bond.

This will leave hydrogen with a oxidation state, since electron it is contributing to the bond is now "taken" by oxygen

Now, take a look at the Lewis structure for hydrogen peroxide, . 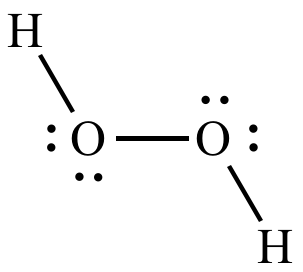 The two oxygen atoms are also bonded to each other, but since both atoms have the same electronegativity value, this bond will not affect their oxidation number.

1252 views around the world