In meiosis, a cell divides twice but the chromosome divides once: How could this be true?

Meiosis is thus divided in meiosis I and meiosis II. Each meiotic division is divided in prophase, metaphase, anaphase and telophase.

Prophase I of meiosis I is further subdivided in
Leptotene,
Zygotene,
Pachytene,
Diplotene and
Diakinesis.

Prophase I is associated with two very important and unique phenomena, synapsis of homologous chromosomes and crossing over before the nuclear membrane dissolves and Metaphase I begins.

In Anaphase I, chromatids do not separate. Two chromosomes of one homologous pair travel to opposite poles.

Thus in Telophase I, only half number of chromosomes accumulate in one pole. This is why meiosis I is reductional division.

Phases of Meiosis II continue as in mitosis, hence chromatids separate during anaphase II and move towards opposite poles. From two products of meiosis I, four haploid cells are produced. 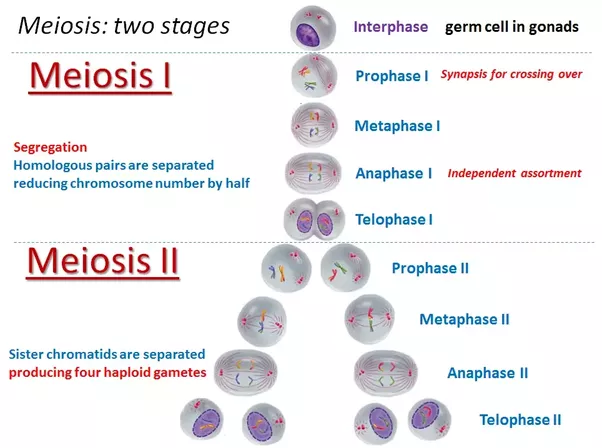