Well, because intermolecular forces are stronger in the diiodine molecule........

The elemental halogens are all bimolecular, i.e. . Because it is a homo-element bond, there is no difference in electronegativity between the bound atoms, and thus this cannot contribute to , and note we speak here of the force between molecules and NOT the force between the atoms in a molecule, which is .

And in fact, as we go down the Group from dichlorine to diiodine, the bond strength in the MOLECULE decreases.... (Note that is unusually weak, and this is attributed to lone pair-lone pair repulsion exhibited by the small, bound fluorine atoms).

However, the physical state of a material is usually a function of INTERMOLECULAR bonding.....note the distinction between , the force of attraction BETWEEN molecules, and or even .......the forces of attraction WITHIN molecules.

The molecule is non-polar, and thus we cannot invoke arguments based on polarity, but the intermolecular bonding is conceived to be due to dispersion forces that operate between molecules, i.e transient dipoles that result from polarization of the electron clouds. And dispersion forces are known to increase with the number of electrons....and so the lower halogens experience GREATER intermolecular bonding. 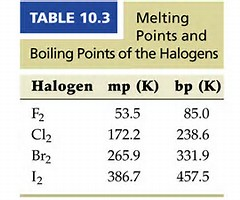 Do these data support this argument? More electrons, more dispersion forces operate, and thus while difluorine, and dichlorine are gases under standard conditions, dibromine is a liquid....and diiodine is a solid. If you are not in 1st or 2nd year university, a lot of this you can ignore.

975 views around the world