What was (is) the difference between #"alchemy"# and #"chemistry"#?

Well alchemy proceeded on the basis of secret knowledge.....

And (as far as I know), the alchemist would jealously guard his knowledge, and carefully vet the initiate (the student), before revealing the arcana ( means secret knowledge so I am told; I just wanted to use that word in a sentence).

On the other hand, the chemist proceeds on the basis of open access to knowledge. The chemist communicates his results for repetition and criticism. If other chemists cannot reproduce his results, the results come into question, and may have to be withdrawn. 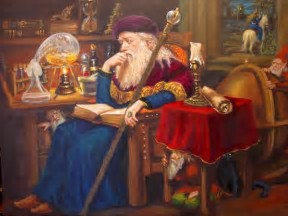 PS Note that in your academic career, you should go to at least one academic convocation, for instance when your first degree is awarded. And when you do this, you have to tog up in the academic gear (which is rented) and then you have to go to receive your award from the worthies of the university, who, on the occasion, are ALL THEMSELVES togged up in the gear of the university where they did their training. It is a funny and interesting thing to see inasmuch as you will see academic robes from other universities, and different mortarboards and hats and cowls.....some of which are really fresh.

And this tradition probably does reflect the idea of secret knowledge, of arcana, of joining an exclusive club of enlightened individuals.

PPS. The alchemist in the picture, is boiling something in a retort...and the silly old bugger has not even got a pair of spex on...he would not continue this practice in a modern laboratory.

2371 views around the world