Does the real resonance structure have a lower or higher total potential energy than each of the contributing structures?

Neither; it is just more spread out, and thus entropically favored. 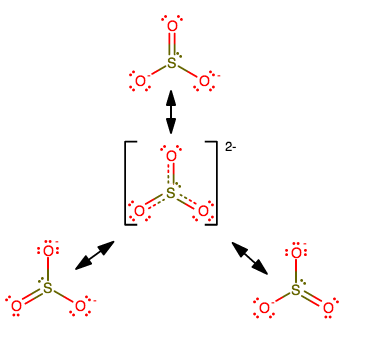 The central structure is the resonance hybrid structure that consists of contributions from all three resonance structures.

So, the only way the energy could change is based on where the electrons have moved.

HOW HAVE THE ELECTRONS "MOVED"?

Since the charge remained the same but the type of bonds changed, the only thing that happened to the electrons going from the resonance structure to the resonance hybrid structure is that they redistributed to form more "evened-out" bonds.

In other words, the double bond became a "less-than-double" bond.

Now, let's figure out what the "less-than-double" bond really means.

In any chosen resonance structure for above, we have two electrons per bond and one total bond. So, to distribute two electrons evenly across three oxygen atoms, we must have "" of a bond.

That's not literally possible. But consider that the bond order is:

The proper way to describe this "less-than-double" bond containing of a bond, then, is saying that the bond order is

Thus, we should say that the resonance hybrid structure of has three identical bonds with bond orders of .

Just so we know we have it right...

So we didn't lose any electrons.

Now that we know how the electron density is distributed, we've accounted for where the electrons have gone.

Recall that the amount of energy is supposed to always be conserved. From accounting for where the electrons have gone, we can conclude that the energy has not been lost from the molecule to stabilize it---it has been redistributed.

Therefore, the resonance hybrid structure of is more stable than its resonance structure contributions because its energy is redistributed in a more stable manner, NOT because it has smaller absolute potential energy.

(In other words, more parts of the molecule are happy, thereby making the whole molecule happier.)

You can read this if you don't understand why we chose to distribute the electrons evenly in .

4637 views around the world