Explain Electron Affinity (with an example of Cl vs Br)?

My chem teacher just explained Electron Affinity and it makes 0 sense to me. She said that Chlorine has a smaller electron affinity than Bromine but when I google it, she is proven false. How can that be? She seems very certain that she's correct.

Let's start with a definition, something that is always useful to have around.

Electron affinity is defined as the amount of energy released when one mole of electrons are added to one mole of atoms in the gaseous state to form one mole of negative ions, or anions.

In simple terms, electron affinity is a measure of the attraction that exists between an atom and an incoming electron.

In order for an element to have a positive electron affinity, energy must be released when a mole of electrons is added to a mole of atoms in the gaseous state.

The more energy is released when this happens, the more positive the electron affinity.

As far as chlorine and bromine are concerned, your teacher is actually wrong. Chlorine does have a higher electron affinity than bromine. 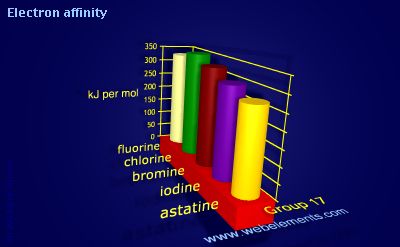 So, why does that happen?

As you know, both chlorine and bromine are located in group 17 of the periodic table, which implies that they have seven electrons on their outermost shell.

A significant amount of energy is released when an electron is added to these elements because this incoming electron allows them to complete their octet.

Bromine is located below chlorine in group 17, which means that a bromine atom is larger than a chlorine atom. This of course implies that the outermost electrons are located further away from the nucleus in bromine's case.

This implies that an incoming electron will not be as attracted by the nucleus as it would be in chlorine's case.

In other words, chlorine has a higher electron affinity than bromine.