How are biomes distributed?

Biomes are determined primarily by temperature and precipitation. Thus, they are distributed throughout the planet in a somewhat predictable way.

Biomes are determined primarily by 1) temperature and 2) precipitation (see the image below). Thus, they are distributed throughout the planet in a somewhat predictable way.

Generally speaking, temperatures decrease as we move away from the poles or as we increase in elevation. In the image below, we can see that as we move closer to the North Pole, we encounter biomes with less and less vegetation. The same is true for elevation. As we go further up the mountain, the type of biome changes from lush forests to sparse forests to biomes that are not characterized by trees at all. 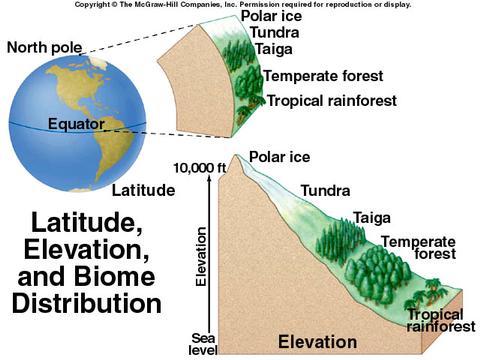 Trends in precipitation are a bit more complicated. Proximity to the equator, currents, the geography of the land, and more factors all influence the amount of precipitation an area receives.

That said, areas that have more precipitation tend to have more vegetation, and areas with less precipitation have less vegetation (refer again to the first image). On one extreme end of the spectrum, both the desert and tundra biomes receive very little rain, thus neither are very lush in terms of greenery. (The two biomes are very different though because they experience different temperatures.)

Thus, the distribution of biomes is determined by temperature, which follows a predictable pattern, and precipitation, which is more complex.