How are hydrogen fuel cells made into energy?

The overall reaction that occurs within a hydrogen fuel cell is the same as that for combustion of hydrogen. This reaction is highly exothermic. Instead of producing heat, electric potential energy is generated.

A fuel cell is a type of electrochemical cell in which the reacting chemicals are continually added (one being oxygen), and products are removed (unlike a car battery or dry cell which is a closed system).

In the case of a hydrogen fuel cell, the process relies on a reaction that involves an equation identical to burning hydrogen

This is an exothermic reaction (produces energy), in a fixed amount regardless of the process used to carry it out. The main difference is that the reaction is carried out in an electrochemical cell, with two half-reactions that take place at different locations within the cell. 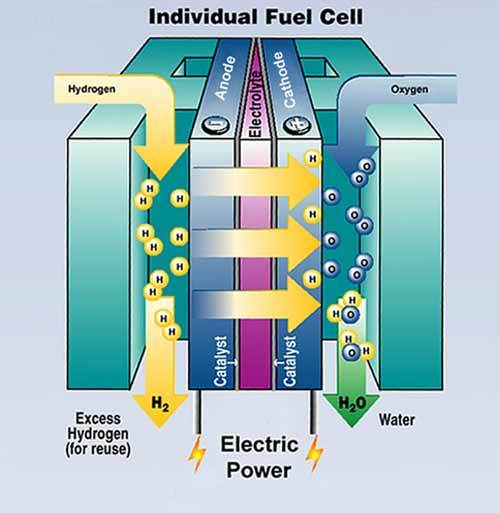 At the cathode of the cell, hydrogen gas is supplied, and the process that occurs is the oxidation of the hydrogen into ions:

The hydrogen ions drift through the permeable anode material, the electrolyte (typically a solution of KOH) and arrive at the cathode. Here, they react with oxygen from the air in a reduction:

This cell generates electrical energy with a cell potential of about 1.25 volts.

The combined "sum" of these two half-reactions (as they are known) yields an equation that is the same as the one that describes combustion of hydrogen gas.

Since the overall reaction is the same, the total energy produced is the same, but the efficiency of the cell (the portion of the energy that can be used to do useful work) is far greater than combustion provides.

You may want to check out this site:

3917 views around the world