How are prions related to proteins?

Great A Prion is a small infectious particle that contains a misfolded protein.

One disease caused by prions is referred to as transmissible spongiform encephalopathies (TSEs) are progressive neurological diseases that are fatal to humans and animals.

Another TSE is Kuru, characterized by progressive ataxia, incapacitation and death.

Prions cause the neurological disease Scrapie which is a degenerative neural condition in sheep. The sheep actually continuously rub their faces and bodies on fences and other objects.

Prions also cause other neurological diseases such as Kuruand Gerstmann-Strausler-Sheinker syndrome.

However, scientists are still studying prions to learn their origins and how prions replicate and cause disease.
(Microbiology Demystified)

The structure of a prion pseudoknot 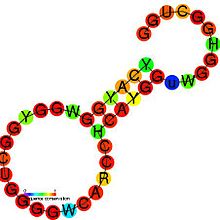 See all questions in Viruses

1598 views around the world