How are the terms gene, locus, and allele related?

Genes code for proteins, alleles are variants of genes, and loci are locations on the chromosome.

An allele is a variant of a gene. Each cell has two alleles (one per parent) for each gene: one dominant, one recessive. The dominant allele is the one which actually codes for the protein, while the recessive one does effectively nothing.

This is why certain characteristics may skip a generation. If you have one parent with blue eyes and one with brown, you will receive both alleles, so have the potential for either colour. However, you will only show one: the dominant variant. If you then have a child, you could pass on either of those alleles, regardless of which one is active, and so your child could end up with blue eyes from the blue eyes buried inside you.

Loci (from Latin locus meaning place) are just positions on the DNA. Locus is to some extent interchangeable with gene, though locus is less specific and doesn't imply that the location codes for an entire gene. 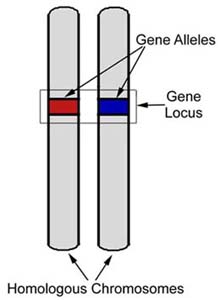