How do minerals change without melting?

This is a really cool way that a mineral can change its atomic structure without melting. But note that the mineral doesn't change its chemical composition in this case.

An example, a mineral such as Kyanite () has three forms which it can exist in depending on the pressure and temperature conditions.

So as we change pressure and temperature a different atomic structure becomes stable and the mineral changes.

Another example is diamond. Diamond is simply carbon () but expose it to pressures of around 40 kilobars or more (> 100 km into the mantle) then you get diamond!

Though, I wouldn't recommend putting your pencil in the oven for a few weeks to try and make diamond! But expose diamond to some high temperature and pressure (below its stability field) and it might just transform back to graphite! 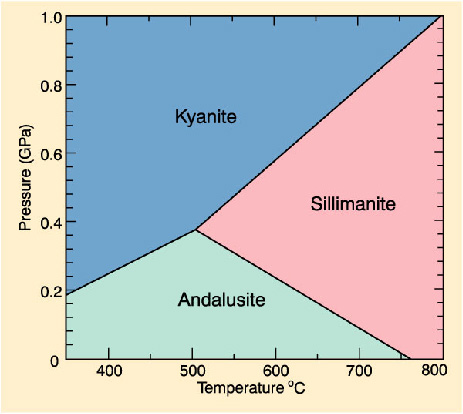 Above is the stability ranges for the three guys I mentioned above, diamond occurs four times higher than this diagram (more than 120km into our mantle)!

See all questions in Minerals and Mineral Groups

3275 views around the world