How do you measure the decay of radioactive isotopes?

Earth Science Evidence about Earth's Past Absolute Ages of Rocks

This is a huge topic, one that you can endless textbooks on and one that progressed hugely in the last 20-30 years. I will give you a very short run down of one way to measure isotopes from radioactive decay.

We will use a zircon () mineral as a case study. Imagine there is a large pluton of molten rock in the Earths crust that is sitting quietly and slowly cooling down. As is cools, certain minerals are going to start crystallising, as they crystallise they will take in elements that are available in the magma. Then, our little friend zircon begins to crystallise, zircon requires zirconium (), silicon () and oxygen () in its atomic structure.

But, zircon will also take in some trace elements, these trace elements will be present in the crystal at concentrations in the ball park of parts per million (ppm), which is a very small amount.

Zircon likes to take in the element uranium () and lead (), we can use these minerals to date this zircon because it just to happens that uranium likes to decay to lead over time. Specifically:

What we do next is measure all of these isotopes on a mass-spectrometer (something like the SHRIMP) and then say to ourselves, if we have this much lead and then we must have had this much uranium ( because uranium decays to lead). We know how long it takes for a given amount of uranium to decay to lead and so we can back calculate.

We can make a plot like the one below: 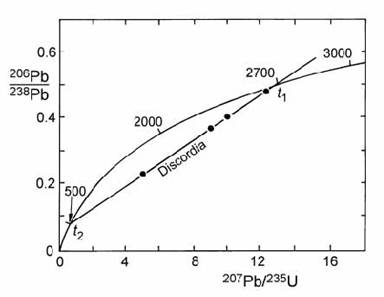 Imagine the black dots are our analyses, we can draw a straight line through them and where the line intercepts the curve it will define an age.

These are the real basics of it, it gets much more complicated and there are also limitations to this technique which I will not go into as the response is already too long! But if you're interested just search: U-Pb age dating and you can get some extra information.

See all questions in Absolute Ages of Rocks

1425 views around the world