How does a terminal alkyne react in a Grignard reaction, will the carbonyl carbon attack the terminal carbon?

Not in a nucleophilic attack, no.

Actually, the pKa of acetylene for example, is , but the pKa of a Grignard reagent is generally much higher than (because it's pretty much the conjugate base of an alkane!).

It's much more likely that it will steal a terminal proton from the alkyne like so: 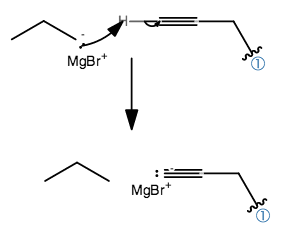 And that deactivates the Grignard reagent. Whoops! The acetylide can still be a pretty nice nucleophile, but not quite as great. The orders of magnitude in the pKa is quite a large difference!