How does keeping a carbonated beverage capped help keep it from going "flat"?

The cap on a carbonated beer or soft-drink is GAS TIGHT......and prevents the passage of gas out from the bottle, and out of solution.

If you are doing A levels you should ask your chem teacher (nicely!) if you can brew home brew (beer or ginger beer) in the laboratory. This is fairly simple to do but needs a bit of organizing; the teachers will certainly appreciate your efforts, because after a few weeks they can drink all the beer that you have made. 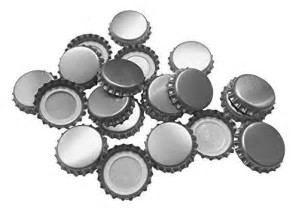 The picture depicts the crown seals that you typically put on the bottle with a capper; I think you can see the neoprene ring on the inside of the cap, which forms a gas-tight seal with the bottle opening to trap the gas that evolves.

2255 views around the world