How is coal processed?

Mine mouth coal for power plants undergoes very little to no processing, while metallurgical or thermal coal for export usually undergoes washing to remove rock particles.

Most coal mines that mine coal for power plants simply dig it up and send it to the power plant for burning. Very little processing. Some times a mine might blend low grade coal with higher grade coal to ensure a constant feedstock quality.

Coal for export - as either coking coal for metallurgical steel making or high value coal for thermal applications - does undergo cleaning or preparation as its called, to mostly remove rock particles. A high amount of rock and clay particles reduces the quality and heating value of the coal and usually means a lower price for the mine.

So upgrading usually consists of grinding the coal and then putting into a number of froth floatation cells and cyclones - in this process, the rock particles are heavier than the coal so the rock sinks and the coal floats on the surface, The coal is then skimmed off, dried to some extent and then put in train cars.
http://pixel.finomnf.top/s/coal-handling-plant-layout/ 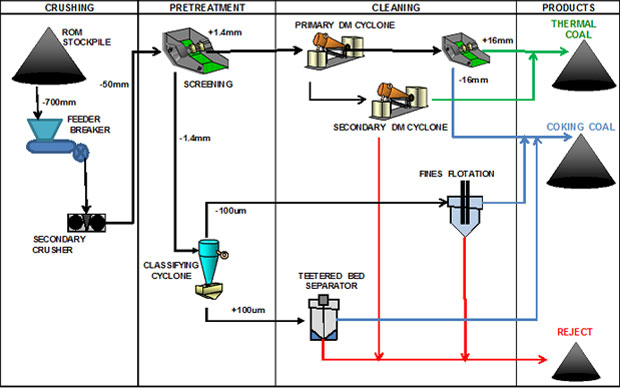 5656 views around the world