How is weathering related to erosion?

Weathering and erosion are part of the terrestrial modeling transformations dynamics occurring throughout geological time.

The process of weathering consists of the alteration (chemical, physical or biological) of the structures of the rocks. From the moment they are exposed to the earth's surface they are "attacked" by the external agents, beginning the process of transformation of the relief.
Weathering is divided into three types, due to the type of transformation to which the rock is subjected, and may be physical, chemical or biological. 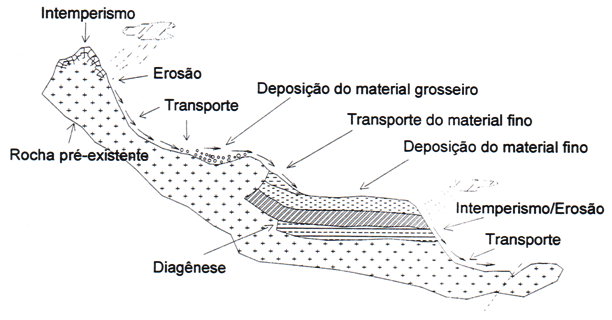 This image represents the dynamics of transformations of terrestrial relief

Its main agents are water, winds and ice, which act in the removal of decomposed material. Erosion takes place in different ways, according to the origin of the agent, which can be: rainwater, fluvial, marine, glacial, wind or anthropic, the latter being the result of the mistaken forms of land management.

The erosion process, and consequently the speed over which it operates, is conditioned by several factors, such as: mother rock, climate, relief, vegetation cover and biological agents, among which man. Under favorable environmental conditions, the erosion process is small, resulting in the formation of a thick soil mantle, on which abundant vegetation develops. Under unfavorable conditions, erosion removes large amounts of decomposed material, soil, resulting in a decrease in the vegetation cover and, consequently, in the increase of the erosive action on the soil, exposing the mother rock to the surface, thus initiating a new process of relief modeling.

3123 views around the world