How many rings does Neptune have? How and when were they discovered?

The existence Neptune's rings were confirmed by the Voyager 2 space probe. However, evidence of the ring's existence was found much earlier during a stellar occultation. In 1984, Neptune passed in front of a star, relative to our perspective, this revealed light bands around Neptune (look below). 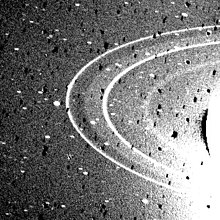 Neptune has five rings: Galle, Le Verrier, Lassell, Arago, and Adams. Its rings were named after the astronomers who made an important discovery related to the planet.

These rings were most likely formed when Neptune's gravity tore a captured moon into a the ring system that we see today.

2668 views around the world