How was the nucleus was discovered?

The nucleus was the first organelle to be discovered. What is most likely the oldest preserved drawing dates back to the early microscopist Antonie van Leeuwenhoek (1632 – 1723).

Oldest known depiction of cells and their nuclei by Antonie van Leeuwenhoek, 1719.

He observed a "Lumen", the nucleus, in the red blood cells of salmon. Unlike mammalian red blood cells, those of other vertebrates still possess nuclei.

The nucleus was also described by Franz Bauer in 1804 and in more detail in 1831 by Scottish botanist Robert Brown in a talk at the Linnean Society of London.
Brown was studying orchids under microscope when he observed an opaque area, which he called the areola or nucleus, in the cells of the flower's outer layer.

The function of the nucleus as carrier of genetic information became clear only later, after mitosis was discovered and the Mendelian rules were rediscovered at the beginning of the 20th century; the chromosome theory of heredity was therefore developed. 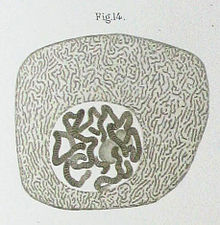 7775 views around the world